My conservative friend and I have been discussing government spending recently. Let it be known that I really don't have a clue about macroeconomics, but just like everyone else - I have an opinion.
I have to agree with my conservative friend in that fact that the current rate of spending is outrageous. How will we ever recover from this mess I ask? So I looked at a few trends. For some reason the Democrats have always been associated with spending. But if you look closely at the numbers, it seems as if the stereotype is wrong.
According the the US Government, Jimmy Carter had a budget deficit of $74 Billion dollars when he left office. Over the next 12 years with two Republican Presidents (Reagan, Bush-HW) the budget deficit more than tripled to $298 Billion. Now, over the next 8 years (Clinton) the US managed to pull itself out of a deficit and manage a $236 Billion surplus - Yes, we were bringing in more money than we were spending. I honestly don't think we'll see that again for a long time. Then came W Bush. Over the past 8 years, the US went from a 236 Billion surplus to an estimated 396 Billion deficit (a low of 413). Seems like we've done some serious spending recently.
Let's also have a look at our US national debt. During the 12 years of the Reagan-Bush-HW era, the US went from $1 Trillion in debt to $4.1 Trillion. A difference of $3.1 Trillion. During the 8 years of Clinton, the US went from $4.1 Trillion in debt to $5.8 Trillion. A difference of about $1.7 Trillion. Then came W Bush. During the W era of 8 years, the US went from $5.8 Trillion to $11 Trillion in debt. A mere difference of $5.2 Trillion.
So, there seems to be a trend - when a Republican is in office, we spend more than we make, and we sell more debt to China (Foreign countries own about 28% of our US Treasury Securities - China owns about 22% of that foreign ownership - the most of any country). I wish I had one of those USA credit cards where I could continue to spend above my income while exponentially increasing my debt.
Regardless of the numbers and regardless of who is in office, we're in a trend now that has to stop. Obama is spending, but I appreciate that his spending is on infrastructure and green technology. This type of spending is an investment in our future and will continue to pay dividends. But we've got to figure out a way to reduce China's ownership of our debt. Someday that bill has to be paid. Now, if we reduce some of the Billions going to Iraq and raise a few taxes, we might be able to pay for some of this crap. Nobody likes more taxes, but if we want to be the world's keeper and manage two wars, we shouldn't be drastically cutting taxes. Instead, open up your wallet and pay for it. We love to spread democracy but we hate paying for it. Instead, we've decided that it is too much of a burden so we'll just pass on our debt to our children and grandchildren.
Imagine what the $1+ Trillion dollars going to Iraq could be paying for right now. Only time will tell.
Posted by T-Rav at 11:38 PM 2 comments: 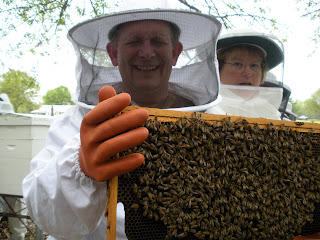 On Friday, I had a question from "The Big Guy" about Colony Collapse Disorder among honey bees. Since this blog is titled 'Sports and Swarms,' I figured I would post some more about bees. And Colony Collapse Disorder (CCD) is at the apex of the honey bee topic list.
First of all, what is the big deal about CCD? Who cares if a few bees die, right? Well, it is a big deal. About 35% of the food we eat, $215 billion world wide, $15 billion US, would not exist without pollination. The planet used to have thousands of pollinators, but with habitat destruction, pesticide use and industrial farming, those insects are unable to meet industry needs. Honey bees are the resilient silent partner in the agriculture industry meeting all the needs of the backyard gardener and the publicly traded farming conglomerate. Until now.
CCD is an affliction particularly targeting commercial bee keepers. I am a really low level hobby bee keeper with 3 hives. Some of the folks in my local bee club have up to 50 hives spread over many properties. In order for a person or business to be considered a commercial bee keeper, they must have 500 hives or more. Most commercial bee keepers are really not in the business for honey - although it can be lucrative - they're in it for pollination services. Adee Honey Farms of South Dakota is the largest bee keeping business in the country. Last year, Adee lost 28,000 of its 70,000 hives. That translates into about 1 billion honey bees who lost their way and never came back to the hive. This is a global issue. The UK has recently seen losses of 30% while Italy has seen up to 50% of their bees disappear.
The symptoms of CCD are really odd. A bee keeper usually finds a hive full of honey and young bee larvae, but no adult bees. It's as if the bees departed the hive and got lost, never making their way back home. Cell towers were first to be scrutinized. Genetically modified crops were next. Both of those theories have been ruled out. It is becoming clear that CCD is not a singular issue. It appears to be a host of issues that are gathering to form the perfect storm. Everything from fungus and pesticides to nutrition and the Israeli Acute Paralysis Virus are combining to weaken and disorient the honey bee.
Neonicotinoids is the latest culprit under the microscope. The sole purpose of this pesticide is to affect the central nervous system of an insect. Sounds familiar when you realize that the CCD hives don't have any adult bees in them and that the mode of action for neonicotinoids is to cause paralysis, with death following shortly afterwards. Bayer (yes, the aspirin company) is currently in the cross hairs of some environmental groups since they are a major producer of pesticides with neonicotinoids.
What's next? Congress has recently allocated a few million dollars for research into CCD. This was after Haagen-Dazs donated $250,000 for honey bee research (some going to Penn State University). Haagen-Dazs has 40% of its flavors reliant on the honey bee's pollination of nuts and fruits. More importantly, there is a trend in Europe where countries are starting to ban the use of neonicotinoids while the EPA is under pressure in the US to release studies done on the pesticide in 2003. Meanwhile, commercial bee keepers are starting to gravitate to organic farms alleviating the fear of pesticide ingestion while the hobby bee keeper is slowly moving to a non-treatment approach when dealing with pests. I personally have made a choice not to use insect treatments in my hives. I feel that bees need to breed themselves out of their own problems, or the problems humans have created for them. It may affect my honey production, but, so be it.
Some facts in this blog are from "...Or Not To Bee" by Rowan Jacobsen, Eating Well - March/April 2009
Posted by T-Rav at 9:16 PM 2 comments:

I was worried when I departed for Australia that my 6 week absence would have an effect on my bees. To reduce the threat of starvation to the bees, I fed each hive about 1 gallon of sugar syrup. I didn't think that it would be enough, but I was hoping that with good weather, they could make it last.

I did a weight test yesterday (two fingers to lift the side of the hive) and found out that they still have plenty of food in the hive. I was worried for nothing it turns out. It was interesting to see the activity as well. Yesterday was a 70 degree day here in Belmont, NC and the bees were out in full force. They were bringing back some really pale yellow pollen which I surmise is the maple pollen. Maple begins blooming this time of year and that pollen is integral in the production of brood since the increase in pollen stores stimulates the queen to start laying eggs.

If I can get another warm and dry day, will open up the hives and check for some eggs, larvae and brood. I won't be in town much over the next 5 months, so anytime I have the opportunity, I have to get into the hives to see what is going on.
Posted by T-Rav at 5:06 PM 4 comments:

Yes, the NZ sun is as powerful as the Australian sun. Don't let the cool weather deceive you... you will burn. Brandi has proven that theory twice and I have proven it once. So far Brandi has burned and peeled around her neck (yes, she is a redneck) and we both got burned today from our trip to Paraparaumu Beach. Brandi's legs are burned and the tops of my feat are on fire. And this fire is not going out!

Nonetheless, our trip is coming to an end. We depart for Auckland tomorrow (Saturday) to act as our staging area for our oversees flight to LA on Sunday. As always, the days have sped by like they typically do on a vacation. We could easily spend another week or two here exploring all of the areas we didn't have time for. But we can't - maybe another trip next year?
Posted by T-Rav at 3:56 AM 1 comment: