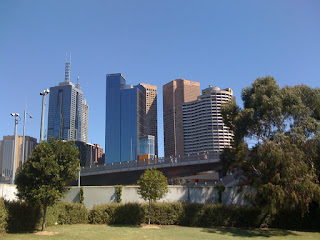 I have spent well over a year of my life in Melbourne, Australia. There are many unique things that have have come to enjoy over the years about Melbourne. A lot of my days in Melbourne are routine, but what lies in the routine is hardly ordinary.

My morning starts out with a right turn out of the hotel and right into a small cafe owned by a few Italian-Australians. The first day I went in, the two men behind the counter struck up a conversation with me as they made my Cappuccino. The next day I walked in and the balding Italian guy immediately started making my Cappuccino without me asking and started a conversation about the tennis. I am now a loyal customer and will be until I depart for New Zealand.

My mornings continue with a 25 minute walk to the Tennis Centre. Typically I have my iPod pumping out some tunes which allows me to take in the sights without hearing the usual annoying sounds of the morning commuters. What I see is the great architecture and the clean streets. I also see the old style and the modern trams shuttling thousands of people to work. I see the attractive Aussie women dressed impeccably for work (not that I'm LOOKING).

Once I get out of the city, I begin trekking along the Yarra River. Even though my iPod is spinning some heavy metal tunes, the view couldn't be better or more soothing. Every morning hundreds of rowers are preparing for their morning crew practice on calm water. There are also countless commuters on bikes speeding to work as if they are late or trying to beat their time from the day before.

And then comes the tennis. Nothing is more routine than tennis. Men's matches are 5 sets (no tiebreak in the 5th) and Women's are 3 sets also with no tiebreak in the 3rd. Doubles matches are always boring and the Serbian Fans are always going to fight with the Bosnian fans. Every now and then the excitement level rises when Federer is playing Nadal, but typically the matches go on with out much excitement. But the simple fact that the tennis is being played in Melbourne makes it special.

So, the next time you think that your routine is boring and you're looking for a change, just look a little deeper for the things that made your day routine to begin with. Chances are you'll see the day a little clearer and appreciate the simple tasks as unique.

Cricket at the "G" 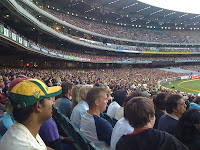 This past Sunday night a bunch of us went to the Cricket 20/20 Australia vs South Africa. The 20/20 is a great format fit for us Americans who are used to a game lasting no more than 3 hours. Australia basically kicked the crap out of South Africa in true Aussie Cricket style. The match took place at the MCG, (Melbourne Cricket Ground) hallowed grounds for Cricket and Aussie rules football fans. It seats more than 100,000 but they haven't quite reached the Penn State Football Beaver Stadium status of 110,000. That is a goal near impossible to achieve.

It is now official - I like cricket better than baseball - at least to watch. Oh, I also got myself a nice bucket hat - awesome.
Posted by T-Rav at 7:07 AM 9 comments:

Dad, I swear I'll give you guys a call eventually. If it makes any difference, I've only called Brandi twice since I've been here. And yes, ET calls home more than I do.
Posted by T-Rav at 3:11 AM 1 comment: 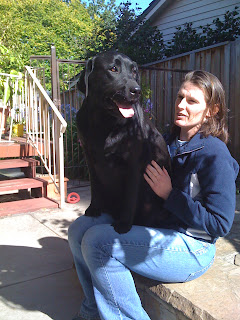 For those of you who have Labs for dogs you'll know what I mean when I say all Labs are alike. I recently met up with Jo (pictured), Ken, Trapper (the talker) and Sherman (the goofy one on the lap). As soon as I saw Sherman I recognized him as my female lab Riley. But as soon as I walked through the gate he instantly reminded me of my male Lab Chase. The extreme urge to show off the nearest toy available and prance around with it was the first give-away.

There were other signs as well. As you can see in the picture, Sherman loves to sit on Jo's lap. My Chase has to be touching you at all times and if he is sitting, it is on your feet.

Tennis balls - Sherman loves them, Chase can't live without them (he especially likes the balls I brought back from Wimbledon).


Brandi and I have recently been talking about what might be our next dog. We've been thinking of a German Shorthair... but I'm not sure I could live without a Lab. Our female has been a gem all of her life. Our male came to us crazy and wild - now he is slightly wild but super lovable. If you can handle the first two years of a crazy Lab, you are rewarded with a great dog. Labs for everyone!
Posted by T-Rav at 1:48 AM 2 comments: 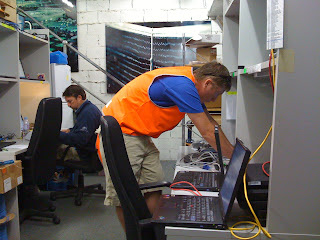 Notice the Blaze Orange vest that Glyn has on? It is on everyone here in Australia. You can't walk anywhere without seeing blinding orange or yellow. The Australian's are known for their safety or at least their attempt at safety. The down side of that is the barrage of safety vests thrown at you as you try to get something done. We've pretty much determined that the vest is our permenant uniform - if only it had an IBM logo on it.

For me, once sensory adaptation sets it, I don't recognize them anymore. More to the point, if everyone is wearing a safety vest on a work site isn't that the same as everyone not wearing one?

Regardless of my rants, I think I actually make the vest look GOOD!
Posted by T-Rav at 7:34 PM 5 comments: