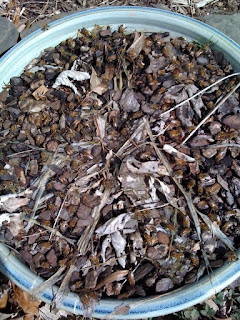 It's hard to see, but in the photo above (click on photo to enlarge) there are about 100 bees in a pot that is just inside our gate entrance. Why? It is in the 50's today and the bees are out looking for water. I've noticed over the past few years that the bees are attracted to Brandi's potted plants. My theory is that the potting soil that Brandi uses contains peat. Peat is good at holding moisture and it also has certain resins that the bees can use for propolis. Propolis is, of course, used in 'gluing' areas inside the hive such as cracks that may allow air or pests through.

I did manage to open one of my hives up this past Sunday (with my 86 year old neighbor Jackie). I found some brood, but I was expecting more. With the recent cold weather, I'm not entirely surprised. Seeing brood however means that I have a healthy laying queen.

I also found a lot of dead bees in the frames. This surprised me at first, but I realized that this is the earliest I've ever opened up a hive coming out of winter. The dead bees I found were all in the cells of the wax which to me indicates one thing; they died of exposure. When it gets really cold, the bees huddle into a ball shape to maintain a temperature of about 95 degrees (within the ball). The bees on the outer edge of that ball face the coldest temperatures and they can succumb to the cold. Over the next few warm days, the worker bees will start clearing out the dead bees to make room for the new eggs that the queen will be laying. They better hurry; the nectar starts to flow in mid April.
Posted by T-Rav at 2:30 PM 1 comment: 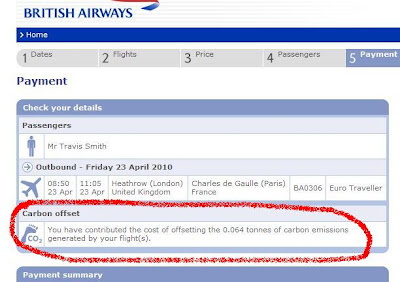 Brandi and I are going to France the last week of April and I am meeting her in Paris after my Wimbledon spring test. When booking my flight on British Airways, (which was cheaper than the travel sites due to the exchange rate) I noticed I could contribute to carbon reduction projects by paying a about 1 US Dollar. What they do is estimate the amount of carbon I use by flying on that particular flight and then they give me the option of offsetting my carbon usage. Of course I said yes! The bees were out and about today with the nice weather. We got to a high of 60 degrees and the bees took full advantage bringing in loads of pollen.

I'm bringing a guest into the apiary tomorrow. My 85 year old
neighbor, Jackie, will be joining me as I take a quick look into the
hives. It will be my first educational visit and I'm looking forward
to it. 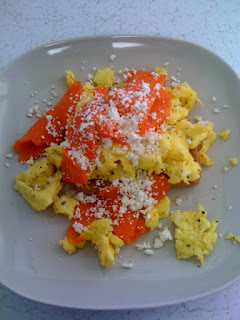 In honor of my colleagues working in the Pacific Northwest, I decided to have myself a nice PNW breakfast. Scrambled eggs on toast with smoked salmon. Oh, with a nice sprinkling of feta cheese. Outstanding.
Posted by T-Rav at 7:52 PM 3 comments:

The first email I got today was from the "Brain" (Mitch). The second email of the day was from my better half...

"If you go to the grocery store, please get apples, broccoli, and organs. Only get the fruit if they look "bright" and healthy."

My first question was; does this mean I can get the organs if the look old, dark and cancerous?

My wife does work in health care; but seriously, what kind of operation are they running?
Posted by T-Rav at 10:46 AM 2 comments: 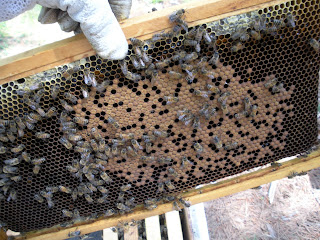 The thing that aggravates me the most about our recent cool and snowy weather is the impact it is having on my bees. As I look up at the tops of the Maple trees, I see them starting to bloom. Maple is the first important source of nectar, and more importantly, pollen. This pollen stimulates brood growth in the colony and kick starts their productivity. Now the cold is affecting the blooms and the ability for the bees to get out of the hives.

It is right about two months until the "honey flow" for the Piedmont of North Carolina. Two quick months for the bees to build up their brood. Considering that it takes a worker bee 21 days to go from egg to adult, there is not much time to get things moving. Once the Tulip Poplar blooms, it is all up to the bees and the weather.

Last year was the first year out of three that I had any luck. My first year was a learning year. Add to that a hard frost (those of you at the Masters remember the cold) that killed a lot of the Tulip Poplar blooms and it was a dismal year for me. The second year started out strong for my bees. Two really strong colonies - right up until they swarmed. So again, no measurable amount of honey. But last year... man was I in for a surprise. 150 pounds later, I'm just now running out of honey.

If I can get lucky with minimal swarms and good weather in April, I'll be looking at another bumper crop. But those things are beyond my control.
Posted by T-Rav at 7:09 PM No comments: 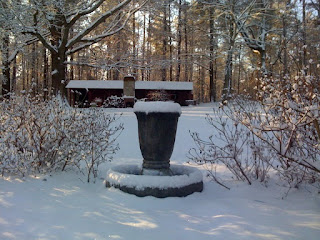 2 inches of snow overnight. It's not much in comparison to my father's
house, but dammit I live in the south.
Posted by T-Rav at 9:31 AM 2 comments:

So I played some hockey on Wednesday night. It was one of my rougher excursions, especially with number 85 on the other team. Just for reference, I play defense. Defense entails protecting the area around your goal keeper by any means necessary. And, in the somewhat rare instance, protecting the goalie who is usually defenseless when being bombarded by the opposing team. This is all standard hockey defense. Unless you are 5'8" and slightly over 150 lbs.

I typically defend my side of the net against dudes (and ladies) who are significantly larger than me. Therein lies the fun. Imagine me trying to push someone out of the way who is 6 inches taller and 100 lbs heavier. Some of them are even the size of The Big Guy. Typically when they are as big as TBG they just turn around and laugh at me.

But it is when I (the small guy) and the opponent (the big guy) start getting angry at each other when things really start to hurt. This past Wednesday, I drew three penalties against the other team for retaliation. But those penalties came at a small cost. 1) Slapshot to the calf -which began cramping shortly after. 2) Sore jaw - from my head slamming into the ice. 3) Whiplash - again from my head slamming to the ice. 4) Sore back and hip - from #19 hooking my legs then falling on me - and then picking me up by my legs as he got up and slammed me back down. It is important to note that even though I had to urge to get up and punch #19 in the face, I just didn't have the energy.

Even though I am walking around the house gimpy, having to pick my head up off of the pillow to get up in the morning, I loved every minute of that hockey game. I liked it because playing against larger and rougher guys makes me play harder. I also get a kick out of the bigger dudes getting a bit upset that some little guy is challenging them.

Nonetheless, I shook hands after the game and told them all I look forward to our next game. Number 85 and I agreed that we both had fun and no matter what happens on the ice, we'll laugh about it after.

We lost 4 - 1. Our next game is against a team who is much faster than us. That will take more agility and less thuggery.
Posted by T-Rav at 9:24 AM 3 comments: