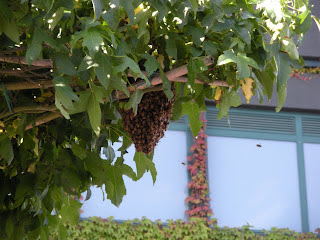 How appropriate that my blog is called Sports and Swarms... I took this photo outside of Centre Court today around 5:00 PM. The tournament blocked off an area around the tree and had about 6 ground staff there scratching their heads about what to do. I would classify this as a very small swarm - maybe 1,000 bees.
This is the second event that I've been to where I've seen a swarm. The other event was in 2007 during the Jamie Farr Kroger Classic LPGA in Toledo, Ohio. That swarm freaked everyone out. The swarm came out of an office trailer near our truck and had bees all over the place. People were running for their lives. And of course no one got stung. When everyone found out that I was a beekeeper, I became the resident expert on what to do next.
Seeing this swarm really fires me up to get home and check on my hives. I'll be harvesting what ever honey I have - hopefully enough to fill a few jars. However, I fear that the drought is affecting production.
Posted by T-Rav at 12:44 PM No comments: 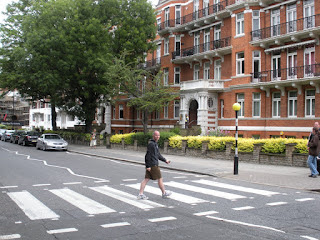 It was a fine day off from Tennis on this past Sunday. Bill Mitchell and I tubed it down to Abbey Road and got some pictures crossing Abbey Road. I'm not much of a beatles fan but it was nice to see the area and see what all of the fuss is about. We also stopped by McCartney's house. He wasn't home.

After a stop in Spital Square and Brick Road (a surprisingly eccentric area) we jumped back on the tube to head home. We ended up being late to our own party. We planned a gathering for IDS and IBM folks which turned out to be very nice. Erich did most of the cooking - which was outstanding. I'm impressed by Erich culinary skills. Erich apparently watches the food channel as much as I do. He is a confessed Rachel Ray lover.
I tried to go to bed around 10:40 pm. Unfortunately, the noise emminating from the lower part of the house was beyond my IPod's capacity to mask it. Since I lost the noise battle I just began reading. Not long after midnight, the neighbor called to say pipe it down. The party ended. The one thing I learned last night is that no one employed by IBM or IDS can carry a tune. I guess that is why they're stuck in the IT field.
The weather today is looking good and play is well under way. It's looking as if we may get some bad weather on Wednesday after a splendid day forcasted for Tuesday. My luck, it will rain Saturday and Sunday and they'll move play to Monday. Nonetheless, I'll be back in the states in just over a week.
Posted by T-Rav at 8:08 AM No comments:

A wonderful day in London. Sun is shining, temperature is warm and we have a new logo on the IBM display. The dingo is not only a network superstar but a graphics genius as well.

It is unfortunate that we are running out of American players in The Championships. But in the end, I could care less. As long as the scoreboards and radar are working for the final on Sunday I will be a happy man. Then, if the maid folds my laundry Monday morning... well, it just can't get any better than that.

Tomorrow is a day off. No play on the middle Sunday here at Wimbledon. I plan on sleeping a lot. BM is going to take me to some Beatles sites which should fill up some of the day. Maybe I'll have some pictures to post after our excursion.
Posted by T-Rav at 8:57 AM 1 comment:

Things are running fairly smoothly here in Wimbledon. Apart from some operator error from the dingo and some fixes by the FSU Ref, I'm confident about the rest of the tournament.

We did see our first rain today that suspended play for about 1 hour. Fortunately, we can look forward to a day off on Sunday. I'm voting for all grand slams to have the middle Sunday designated as a staff day off. We can all sleep in and recharge our batteries at the pub. I'm sure that was just an oversight!
Posted by T-Rav at 10:50 AM 1 comment: