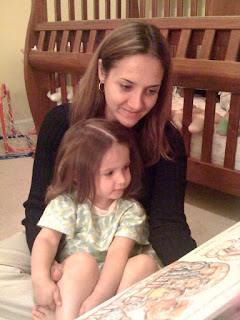 Isn't this nice... Pam reading to Lindsey before bed time. I wish Andy would read to me before I go to bed.
Posted by T-Rav at 9:50 AM 3 comments:

Here is a recent headline that caught my attention:
"Obama family joins the growing ranks of Americans engaged in the emerging backyard beekeeping movement"

It appears as if the new White House garden is getting some pollinators. I knew the Obama's were good for the White House... This just confirms it!
Posted by T-Rav at 10:16 PM 3 comments:

Since today was forecasted to be the warmest day of the week, I had a look at my hives. My first task was to replace the brood box on my "Russian" hive. I had a mismatch of manufacturers with my brood box and super (where the honey storage is) and it was causing the bees to build comb from the brood frames to the super frames. Basically, when bees have a space wider than 3/8" they will typically fill it with comb. After I finished with that annoyance I moved on to the other two "Italian" hives. The photos that I've posted are the Italians. You can tell the Italian bees by their lighter yellow appearance. Russians tend to be darker on the abdomen.
Both Italian hives seem to be in good shape. If I don't have any swarms (queen takes off with half of the workers to start a new hive) I might actually get some honey this year. 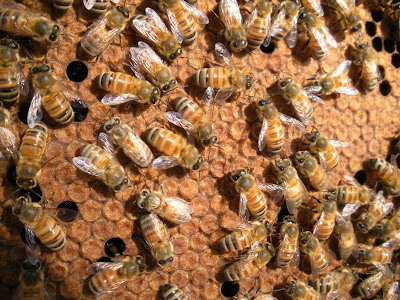 The photo above is a close up view of the image below. The image shows capped brood with the worker bees tending to them. Capped brood are bee pupae turning into adult bees. They are capped with a mixture of wax and propolis. Once the adult bee is ready to emerge, the bee will chew its way through the cap and immediately clean out that cell so it is ready for another egg.
Below is a larger view of the brood frame with capped brood. Notice that there are very few missing cells or blank cells on the frame. This indicates that I have a strong queen and therefore a strong hive. I'll have to pay close attention to this hive so they don't get overcrowded and swarm on me. 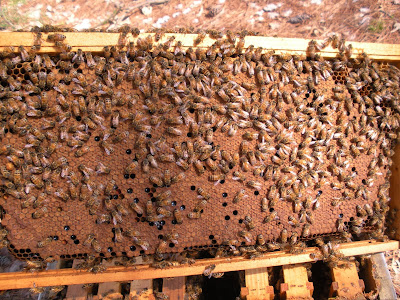 The photo below shows a frame mostly filled with pollen. It is easy to see the yellow pollen on the top middle of the photo where there is a void of bees. Pollen is crucial to brood production as it is the sole protein source for the youngsters. It takes one full cell of pollen and two cells of honey to raise one bee. 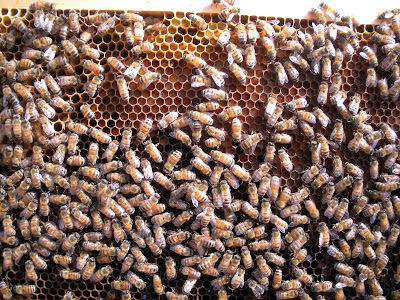 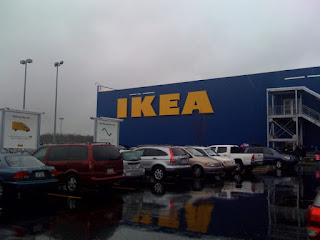 Brandi and I recently went to IKEA in Charlotte to see the newly opened store. I was not expecting the rest of Charlotte to be there at the same time.
When we pulled into the parking lot - wait, I mean parking abyss, I was overwhelmed by the amount of traffic that was being directed by a full time parking staff. There had to be over 1,000 parking spaces and we got there early enough to get one of the last 30 empty spaces. I thought shopping at Wal-mart was bad... This was much worse. When we departed, the parking had overflowed to the highways.
Apparently the recession has not hit Charlotte yet - even though Charlotte is the 2nd largest banking district in the world. The shear number of people cycling through the store leads me to believe that IKEA will single handedly bring our economy out of the dump. The store is efficiently set up to keep people moving in a uniform direction which prohibits people from gathering or reversing direction, therefore reducing "people jams." Genius design.
What disturbed me about my visit to IKEA was the excess that was on display. The first thing I noticed when Brandi drove into the lot was the volume of SUV's. I did a quick sample on our drive out by counting 10 vehicles in a particular row and identified that 7 of 10 vehicles were SUV's. The next row I counted 8 of 10 vehicles that were SUV's. Since this was by no means scientific, I'm going to go with the average of every 7 of 10 vehicles at IKEA were SUV's or Mini-vans.
What does this mean? It means our oversized vehicle goes right along with our desire for oversized low cost warehouses. It means that we don't mind spending $100 to fill our SUV's with refined foreign oil while at the same time spending $1000 on discount furniture and home wares made in Sweden. We continue to shop at Wal-mart where the value is unbeatable while relying on imported oil to fuel our excessive demand for convenience. Americans steadily want bigger and bigger things for cheaper prices. We want to live in a $500,000 house on an $80,000 household income - and then buy a $40,000 vehicle. EXCESS!
Now we're all sobbing as unemployment soars and our jobs are shipped overseas. When I was younger (age 9) I remember my dad buying me a new ball glove. It was a Wilson A2000 and it was one of the last Wilson gloves to be made in the US. I lived in a house that my Mom and Dad bought for $17,000 in 1972. Our cars (US made) were always bought used and we ran them into the ground. We didn't have credit card debt. My Dad continues his message to this day - If you can't pay it off at the end of the month, you can't afford it! Those days are long gone.
Don't get me wrong, I'm to blame just like everyone else. I'm really just tired of everyone blaming government and banks for our demise. We're all to blame - especially when our own greed and grossly exaggerated quest for the "American dream" distorts our reality. Entitlement, greed and excess have become endemic personality traits among Americans. I just hope we learn from the recent economic events and we begin to live within our means.
Posted by T-Rav at 10:10 PM 6 comments: 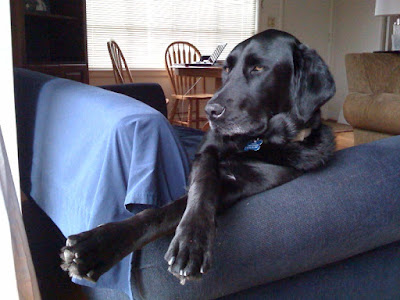 I wish I could relax like this! My boy looking for squirrels.
Posted by T-Rav at 6:12 PM 4 comments: 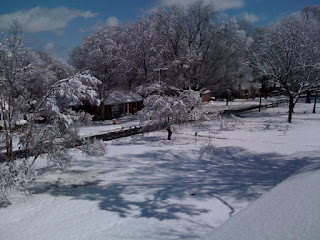 The snow last night (4 inches) was a bad omen. My dad and I had grand plans today to install a new faucet and a new toilet. We started around 8:30am. It is now 8:30pm and the toilet is still not working... mind you, my dad is a retired pipe fitter.

We discovered that when we installed the new low-flow toilet that it wouldn't flush. So, onto the snow covered roof i went (photo taken from roof). Why the roof? That is where the vent is for the bathroom. I immediately discovered that the vent pipe is completely clogged about 10 feet down from the roof. I tried for 20 minutes to hammer away at the clog - NO LUCK! We called roto-rooter (the Aussies will love that term). The scheduled a 3:30 appointment. At 3:30, the called and said that due to the snow, they were running behind and we'll see you in the morning.

At least the faucet is working!
Posted by T-Rav at 8:15 PM 2 comments:

I got a little fired up over the past few days regarding politics. So, here is another post about my varying views with the "right." I'll try and stop the rants, but I've been a bit "put off" by some recent comments.
This post highlights some recent comments by Rush "the beacon of hope" Limbaugh.
"We want every American to be the best he or she chooses to be. We recognize that we are all individuals. We love and revere our founding documents, the Constitution and the Declaration of Independence. We believe that the preamble of the Constitution contains an inarguable truth, that we are all endowed by our creator with certain inalienable rights, among them life, liberty, freedom -- and the pursuit of happiness,"
Apparently Rush wasn't including those who are gay or lesbian. Rush's comments sound great but are a little hypocritical don't you think? We are ALL endowed by our creator... Notice it doesn't specify what religion.
Here's another good one:
"He (Obama) wants people in fear, angst and crisis, fearing the worst each and every day, because that clears the decks for President Obama and his pals to come in with the answers, which are abject failures, historically shown and demonstrated. Doesn't matter. They'll have control of it when it's all over. And that's what they want," Limbaugh said.
Fear, angst, crisis? This sounds familiar. Remember the republicans selling the war in Iraq? The entire country was forced to believe that if we didn't invade Iraq, there would be numerous mushroom clouds across the US. The fact is; Republicans, namely "W" Bush, invented the politics of fear. About 6 years ago, I was an UN-American, commie, socialist, Muslim lover since I didn't agree with the war in Iraq. Remember when we were told if we bought "french fries" that the terrorists would win. If we disagreed with Bush, the terrorists won. If we disagreed at all with the Bush policies on Iraq, well then, we should just go live in Canada. So, sorry Rush, you and your party invented fear, angst and crisis when you decided to invade another country and you wanted every American on board with that decision.
Also, show me the facts that demonstrate your idiotic comment since you say that these "failures" are shown and demonstrated.
I could keep going, but I'd rather be doing something more productive than waste time talking about Rush Limbaugh.
Posted by T-Rav at 11:11 AM 3 comments: