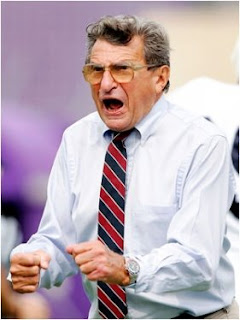 Holy Crap! Penn State prevails 13-6 over Ohio State.
I am sick to my stomach and I'm working on a Migraine from the stress.
Brandi and I are scheduled to go to the PSU - Michigan State game on November 22 (If my loving Father can get us tickets). It will be awesome if PSU is still undefeated at that point.
The stress continues.
Posted by T-Rav at 12:21 AM 2 comments:

I voted today, did you?

Here in Red Neck, NC we have early voting. It's nice too. I do not want to stand in line for 4 hours like I did in the last Presidential election, although, I did stand in line for 25 minutes today to cast my vote. 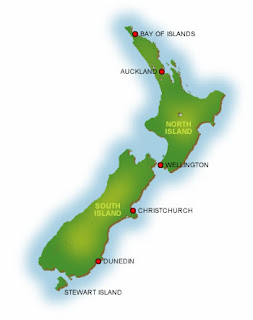 I haven't even posted any photos from our trip to Scotland and I've already booked a trip to New Zealand.
Once I found out that it was confirmed that I will be working the Australian Open for IDS, I started working on a trip to New Zealand with Brandi. This process has not been fun. Here are some set backs along the way:
1. Brandi wanted to depart for NZ on January 24. With a Frequent Flyer ticket there are few options. I went through 5 departure dates before I found a "frequent flyer seat."
2. Alex from USAirways got me hooked up on an itinerary and put it on hold for 3 days
3. Brandi had to get approval from her boss for the trip - He would never say no because he's afraid Brandi may quit!
4. It takes 80,000 miles to book a ticket to NZ. I had 72,000 on USAirways. I had to find/buy 8000 miles.
5. I found out that I could "share" miles between participants of the Dividend Awards program.
6. I also found out that it costs 1 cent per mile + $30 processing fee + 7.5% Federal Tax. 8000 miles later (shared from Brandi's account to my account) it cost me $116.
7. I forgot to mention that the share program can only be completed on-line - where I had multiple errors popping up. After three calls to USAirways I found out that the FF# had to use upper case letters!
8. OK, miles sorted - onto the confirmed booking. I called USAirways back with my confirmation number and spoke to Sybile. Just as she got to the "miles deduction" from my account she noticed a problem and put me on hold. 30 minutes later on hold I decided to hang up and call back.
9. This time I spoke with Connie and I explained the situation and we started over.
9a. She also had an issue with the miles deductions - solved quickly - Great!
9b. As she was entering my Credit Card information she noticed that when she saved it, the information would disappear.
9c. Credit Card? Some of you may be wondering why I would be using a credit card for a "free ticket?" FYI - It cost me $146 for my "free ticket" added onto $116 for the "shared miles"
9d. Back on track now... Connie found out that there was an address in the record that didn't match mine.
9e. Back on HOLD again. Connie had to contact the ticketing agent so that when she re-entered my address, the ticket wouldn't be cancelled.
9f. It was later discovered that there was someone else editing my record at the same time Connie was (probably Sybile who forgot about me on hold)
9g. Finally after over 2 hours on the phone over two days I have a free ticket that cost me $262
10. But, the $262 is much better than the actual cost of a ticket to New Zealand which averages around $2000.
So, Brandi and I will be in New Zealand from January 30 until February 8. I will fly from Australia and meet her there. Now I've got the unenviable task of booking hotels, cars, a round trip flight from Melbourne, Australia to Auckland, New Zealand and figuring out how we are going to pay for all of this.
After looking at my schedule, I discovered that from November 21 to February 9 I will only be home for 12 days. My dogs will forget who I am!
Posted by T-Rav at 4:49 PM No comments:

A few new things to report on.

I just had my DVR installed by Time Warner Cable. I know I'm a little behind the times, say 2 years, but I'm back on track now. What does a DVR mean to me? It means that I'll be recording all of my shows so Brandi can watch Divine Design, Desperate Housewives, The Starter Wife, Project Runway, etc. I've failed to convince her to watch football and hockey.

Now that I mention football, the other new item I have is the Big Ten Network. Awesome! One day it magically appeared on channel 288 and I was in awe. I couldn't believe my eyes when the Penn State Football Story appeared - In Gaston County, NC. Well, as quickly as it appeared, it also disappeared. Apparently there was a trial viewing of the channel. It worked - I got on line the next day and ordered the channel for $2.25 which also comes with a bunch of Fox sports channels as well as the NHL Network.

Sorry for the Delays

Sorry for the delays in my blog... It resembles the delays in the Underground service tonight (Friday). On our way back from China Town (eating Singapore Noodles) we got on the Piccadilly Line and switched at Earls Court for the District Line to Wimbledon. We were good, but both the Victoria Line and Bakerloo Line were cancelled for the evening.

Anyway, the delays (to my blog) have been caused by an extreme lack of Internet service. That is unless I wanted to pay for it. I'm currently paying 5 pounds (10 dollars) to get Internet access for 60 minutes. I've posted a blog from our Edinburgh trip and due to my expiring Internet access, this is all you get for today. 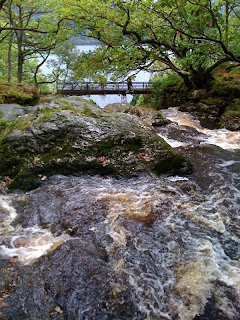 So far Brandi and I have been on a whirlwind trip. A flight that departed on Friday and arrived Saturday morning at London's Gatwick Airport. Being bold travellers we chose to try the Gatwick express train to Victoria station (easy to use and quick). We then got on the Underground Victoria line to London's Kings Cross train station. Fortunately, we were able to get on an earlier train to Edinburgh which departed at 1:00pm. We were then on a train (1 change) for 7 hours. We finally got into our Bed and Breakfast at about 8:30pm. It is important to note that I woke up early to get the score of the Penn State game on my iPhone. It was a good morning to find out that Penn State won and Florida lost. The only thing that could have made it better was if FSU lost so JoePa could open up a two game lead over Bowden.

Needless to say, our journey to Edinburgh was quite exhausting. But it did get better from there. Sunday we spent the day at the Botanical Gardens, Edinburgh Castle, The Royal Mile and Holyrood Park - which included a failed attempt to hike up to Arthurs Seat, an ancient volcanic vent.

Monday we booked a tour to Stirling Castle and Loch Lomond. The trip was a 9 hour tour that gave us extended time to tour Stirling Castle and walk around at Loch Lomond. The weather wasn't the greatest as it rained on an off all day. When we got to the Loch, it was raining sideways. Nevertheless, we did get a chance to hike some of the waterfalls (pictured) and trails that border the loch. The most memorable part of the trip was the persistent car sickness. There are a lot of single lane roads (only fit one vehicle at a time) where we had to stop constantly for oncoming traffic. This constant stopping, starting, curvy roads and pot holes made for a long day of willing ourselves not to throw up. A few times I looked at Brandi and new she was on the verge of losing it. But our perseverance paid off and we made it back to Edinburgh without incident.

Now, were on our way back to London on the train. I am writing this on the train since the train has been the only place I've had a free Internet connection. And back to work it is for me. Meetings Wednesday and Thursday and then more site-seeing Friday and Saturday.
Posted by T-Rav at 3:37 PM No comments: